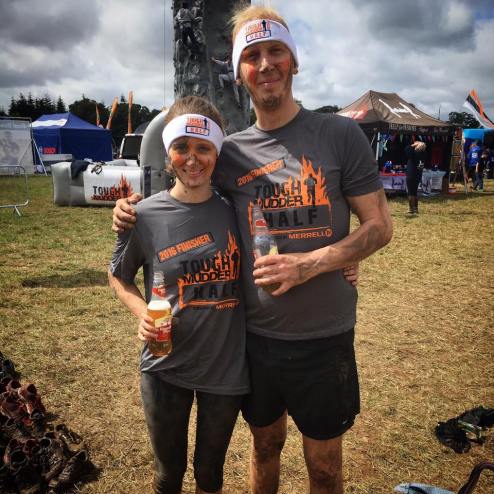 Much to the bewilderment of the majority of people I know (and sometimes myself) my boyfriend and I opted to spend last Sunday morning up to our ears in mud, drenched from head to foot in filthy cold water, and acquiring cuts and bruises by the dozen.

…That’s right. I did a Tough Mudder. Well, a half Tough Mudder to be exact (and to not take credit where credit’s not due!) If you’re unfamiliar with Tough Mudder, it is, in its own words “Probably the Toughest Event on the Planet,” comprising  a “10-12 mile mud and obstacle course designed to drag you out of your comfort zone by testing your physical strength, stamina, and mental grit.”

With a description like that you can hopefully see why undertaking the full challenge seemed a little daunting straight off the bat. Whilst I have no problem with running 10-12 miles, with these type of events it’s the obstacles that scare me. Despite, in the past year, having taken up indoor bouldering, and attempting to commit to some regular body-weight exercises, I still consider myself to be a massive weakling! I was also somewhat further deterred by a less-than-great experience I had at a similar 10k assault course event earlier this year.

To give you some idea of the obstacles we encountered, there was, to name just a few Kiss of Mud, The (slightly terrifying) Berlin Wall, The Mud Mile, Birth Canal, my personal favourite The Block Ness Monster, and of course, the infamous Everest.

So, moment of truth, with 1 half race down, does Tough Mudder really warrant the #fearfactor that has become synonymous with its name? And more importantly, based on my wusses introduction to Tough Mudder, would I now feel confident to tackle the whole event?

No, to the first question (at least for half the distance) and an emphatic YES, to the second.

Two things really stuck out to me at my first Tough Mudder and set the experience apart (in a good way) from the only the assault course race I have participated in (The Major Series, run by British Military Fitness.)

Firstly, the sense of camaraderie. With no podiums, winners, or clocks to race against, Tough Mudder is not about how fast you cross the finish line. Rather, it’s a challenge that, in its own words, ’emphasizes teamwork, and accomplishing something almost as tough as you are.’ On completion of your first Tough Mudder you become a “Legionnaire” earning a different coloured headband for additional Tough Mudders you complete. When you go back to undertake subsequent races, you are encouraged to support and lend a helping hand to those taking on Tough Mudder for the first time. As a Legionnaire, there is a real sense of pride and of belonging to a community that is committed to overcoming their fears, pushing boundaries and stepping firmly outside of your comfort zone. Needless to say, I’m now aspiring to become a Legionnaire.

Secondly, despite its somewhat intimidating reputation, Tough Mudder was actually not thaaaat scary and everyone around me did not seem thaaaat overwhelmingly fit. Full and half racers ran together, and whilst my boyfriend and I ran between all the obstacles, I was genuinely surprised by how many people we saw walking. (I’m not knocking it; if I’d been running the full 12 miles with over 20 gruelling obstacles, there is no doubt I’d have walked at certain points too!) It was incredibly reassuring.

In my head, I’d built Tough Mudder up into some kind of event for elite, super athletes, but having experienced the half, I have no doubt that I could, and will at some point, complete the whole course. And the thing is, if I can, so can you.