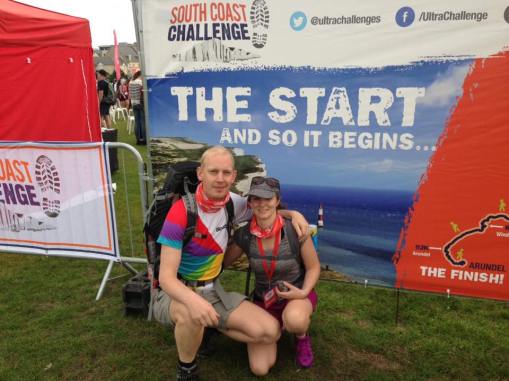 It’s taken me a month to get round to writing this. Partially, yes,  because I have been busy, but partially because I’m not very good at facing up to failure. I’ve sat down and started this post several times, before deciding that it’s more important I do this-that-and the other and putting it off yet again.

I’m currently sat here at my parents house in Newmarket. It’s a rainy afternoon, I’ve got two weeks off work before I start a new job, I went for a tough hilly 10.5 mile run yesterday, and my legs are feeling a little too achey to go out again today, so frankly…I’m running (!) out of excuses not to sit down and write this.

On the Friday of August bank holiday weekend, my boyfriend and I took a late (9pm-ish) train down to Eastbourne, where the 100km South Coast Challenge was starting out from the next day. This wasn’t my first dalliance in to the world of 100km treks, as I’d successfully completed the Thames Path Challenge last September inside the coveted 24 hour finish time. 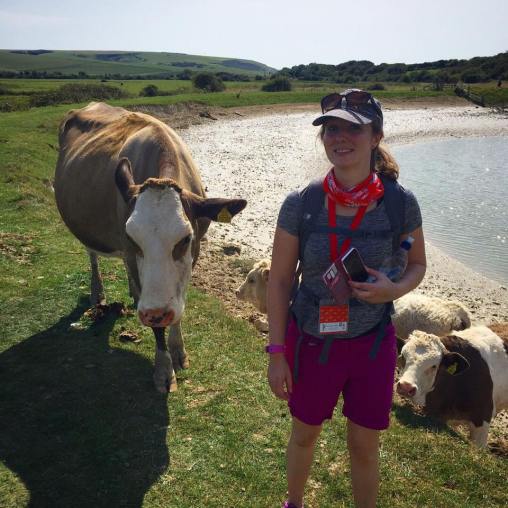 Having deemed the last 100k ‘the hardest thing I’d ever done,’ I stated pretty much immediately that I would ‘never, ever, eveeeeer try to do that again.’ Just under a year later, here I am, stumbling off a train at Eastbourne, absolutely bloody DREADING it because I’d not forgotten how painful, how grueling, an 100k non-stop hike, really is. At least I didn’t think I had – but however hard I’d expected to South Coast Challenge to be, and however painful I remember the Thames Path as being, the reality of this event was (approximately) a hundred million times worse. To be fair, I was only doing this event because Rob had deferred his Thames Path Challenge place last year due to injury, and I’m a competitive little soul and always determined to keep up. More fool me, I guess.

Things didn’t get off to a great start given that we arrived in Eastbourne pretty late and  had a really awful night’s sleep. Not ideal, given that walk had an early start time. I was feeling incredibly anxious due to the enormity of the task I knew we had ahead of us. And Rob, well, I don’t think he was actually nervous, (a little naively as I’m sure he would now admit!) but he’s just generally a terrible sleeper.

The next morning my stomach was in knots to the point I couldn’t force down much breakfast (stupid mistake number one) and the first few kilometres of the walk I was kept occupied by trying to stuff handfuls of muffin, which had by this point disintegrated in to crumbs, in to my mouth. 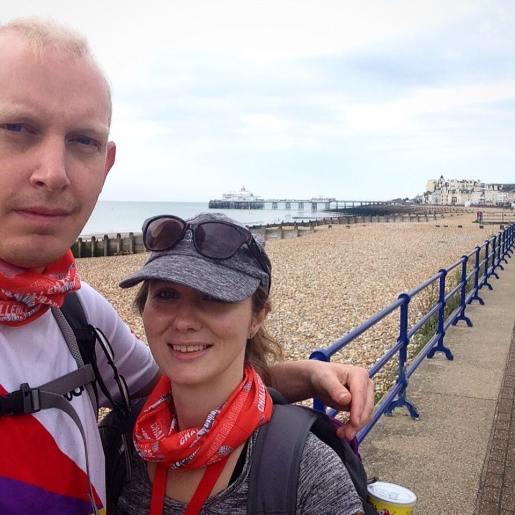 The first 5km were, however, really great!! A lovely walk along Eastbourne seafront. I started to feel better about things. Never mind that we’d done absolutely zero training (I’d obviously be fine as I work out multiple times a week, right?) this walking thing wasn’t so bad. The sun was shining, we’d got our march on, overtaking people left, right and centre. We had totally got this.

So what if there was a hill that looked sort of big, and steep, and scary looming ahead of us for the first 5km?  I run (‘”run”) the hills at Hampstead Heath Parkrun on the regular, and that’s basically the same thing, right? So, this would probably…definitely…be fine.

Righhhh-wrong. As I staggered and wheezed my way up that first impossibly steep, seemingly neverending hill (Ok, I’m exaggerating  it wasn’t that bad…I do actually exercise! But point is, it was tough.)I realise that I was, after all, in for a very long, and a very challenging day.

And boyyy was I right…and we didn’t even make it to 70k! From this first dramatic inclination we went up, down and around the Seven Sisters. And wow, can I just say that this area of coastline is absolutely stunning! The walking, with 7 large hills, was incredibly tough, but we were still fresh at the start of the day, and the fact that the scenery around us was absolutely breathtaking made it all much more than bearable.

In fact, I would recommend everyone to visit the area, and hike the Seven Sisters. However, I would also recommend that after that you head home safe in the knowledge that you’ve got some fresh air and decent exercise, and not then attempt to walk an additional 80+km. (Unless, of course, you’re completely insane.) Oh, and have I even mentioned yet that it also just so happened to be 27 bloody degrees?!

The first major rest stop came 23km in at Alfriston. By this point, I was ready for some food but feeling refreshed and positive. However, everything is somewhat of a blur at that point onwards to the 35km rest stop at Southease. The hills were just continuous, and incredibly draining. By 35km things had already started to get tough, and I think it was at around 40km that things, mentally, started to slip away from us. Or at least from me. We weren’t even half way! We were still a good two hours away from half way. I’d had 3 hours sleep, we were shattered, our feet hurt and I’d started to feel defeated. I also got stung by a bee, which as you can probably imagine, did absolutely nothing to improve my humour. (I’ve been stung twice in my life – Once on the Thames Path Challenge 100km, and once on this one. What are the chances, I mean really?) By this point Rob was also dealing with a pretty sore ankle and some rather pesky (but unidentified) blisters.

That last 7 or 8k in to the rest stop at Hove felt like hell, even though it was probably the only flat part of the course we encountered all day! Walking down Brighton pier seemed to go on for hours, my legs and feet by this point were aching, and I was silently cursing every person we walked by who appeared to be on a night out, or slumped over the railing enjoying what was a stunning sunset, for choosing to do something far more sensible and less crippling with their Saturday night!

Finally…FINALLY….we arrived at the 50k, half way rest point in Hove. I cried with relief, and I’m not just talking one or two tears, I’m talking full on sobfest meltdown. And I’m not usually a crier (There were no tears at the marathon or the TPC!) Honestly that last 10km had taken everything. I couldn’t believe we were finally there. I couldn’t believe I could finally sit down. And eat! I needed to eat. Except that oh, I felt quite sick and couldn’t actually force myself to eat at all.

We sat at that rest stop, where Rob’s parents had kindly come to meet us for two hours (Yes two!) and it was then that a sub 24 hour 100km, which we had at this point been on track for, well and truly slipped away from us. For that whole 120 minutes we debated whether we should carry on. It felt like such a difficult, difficult decision to make. I was doubtless in a worse way than Rob at that point. I felt completely overwhelmed with emotion, and every single part of me hurt. I had literally zero desire to carry on, and yet excepting the defeat felt more than I could bear.

At some point at the end of that two hours, we made the decision to carry on (aka I stopped crying and manned up). By the time we set out, I think it was gone 11pm and by now it was pitch black. It’s the nighttime of these things that is particularly gruelling. The day had been tough enough, but at least the stunning coastline, and beautiful countryside had provided a welcome distraction. In the nighttime you have none of this. It is literally just you, and your headtorch. You can hardly even see the person walking along beside you. By this point, every step is agony, and every step I was fighting the urge to just sit down and the side of the road and cry. I can’t lie, I did actually do this on more than one occasion. I can’t remember ever, having felt so physically exhausted and drained as I did from 50 – 69km. 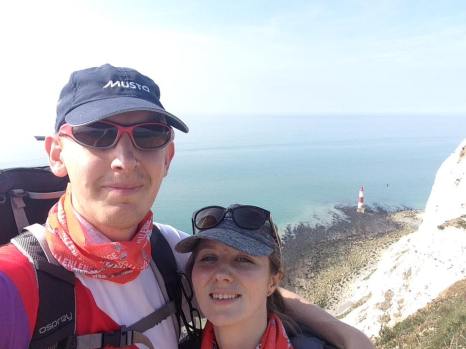 It is in the dark of night, in the middle of no-where, miles from the next checkpoint, barely able to see another soul, that you are confronted with the truest version of yourself. In these moments there is nothing except you, against yourself. I’ve always felt that marathon running and endurance events are more a mental than a physical challenge, because no matter how prepared you are, and how much you’ve trained, for a lot of us, just when you’re starting to tire, when you’re giving it your all, your mind will kick in and it’ll tell you that you can’t do, that it’s too much, that you’re not going to succeed. It won’t be your legs that buckle beneath, it’ll be your mind that taunts you, willing you to give up, to give in and to fail.

And for me, no-where is this mental/physical battle played out more dramatically than during those nighttime stretches of a 24 hours, 100km hike when you are exhausted, sleep-deprived and encroaching on delirious. I’m sad to report, that on this occasion, for the first time ever (although it’s had a bloody good crack at it before) at an event such as this, my mind completely got the better of me. We dropped out at a 69km in the early hours of the morning. Although, I guess it should be said, Rob had some significant ankle pain, which was also an important factor in our decision to drop out.

I felt completely and utterly broken. I was drained, exhausted and delirious. I had literally nothing left to give. At that point in time, there was no doubt in my mind that the right thing for me, and for both of us, was to drop out.

Still, I felt disappointed in myself for days, and truth is, Rob’s ankle aside, if I’d managed to fight my demons and battle on that day, whether I would physically and mentally have been able to complete that challenge, I have absolutely no idea.

Still, they say you learn more from failure than success, and some ‘school-boy’ errors were made for sure, and with that there are some learnings for the future. We should have sucked up the more expensive train ticket cost, to allow us to get to Eastbourne earlier the night before to ensure a good night’s sleep. We should both (in particular me) have eaten far more throughout the day. Rob should have paid more attention to dressing his feet as soon as areas became sore (I actually managed to do this quite effectively, having learnt from last year, and it prevented a number of serious blisters) and all-in-all we should have slowed down and enjoyed the scenery more, rather than obsessing over getting to the end in sub 24 hours. We didn’t achieve that anyway, and I’m pretty sure a more chilled approach would have made a more enjoyable experience of the 69km we did complete.

So, Rob has learnt, just as I did last year, that walking 100km in 24 hours in an incredible challenge. (Honestly, god help anyone who says to me “but it’s only walking??!”)  and we’ve firmly agreed that 100km hikes in 24 hours are just not for us.