So, as I’m sure you know, the London Marathon took place on the 23rd April 2017. For the last 10 days I’ve been a little bit naughty, and put off writing this blog post as the experience exceeded all my wildest expectations, so much so, that I’m not sure my words here can ever do it justice.

The weekend before the marathon, as I mentioned in my last post, I went for a final 9 mile run around Grafham Water and I was a little concerned to seemingly pick up a niggle on my right hip. I took the rest of the week easy, in fact, I did no exercise at all, until the Saturday evening, when my training plan recommended heading out for a 15 minute jog, to stretch my legs. I did, and my leg felt bothersome the entire time. With a sharp pain around my right hip when I ran, I started to very much get THE FEAR for the following day.

The following morning – race day – I awoke early feeling excited, but veeeery nervous, particularly about whether my hip was going to hold up. After a large porridge and pasta breakfast (yum!) we caught the train and were on our way.

Despite arriving in Greenwich (for the red start) around 08.40, we wasted a looooooot for time stood in a toilet queue in a nearby pub, and actually didn’t have too much time to spare once we eventually entered Greenwich Park and the race start area itself. In fact, when the race started we were still in a different toilet queue (blame those pre-race nerves) which made me somewhat anxious. Thankfully, we were in the last starter pen, pen 9, so had time to take care of business and still cross the start-line with our group at 10.24am! 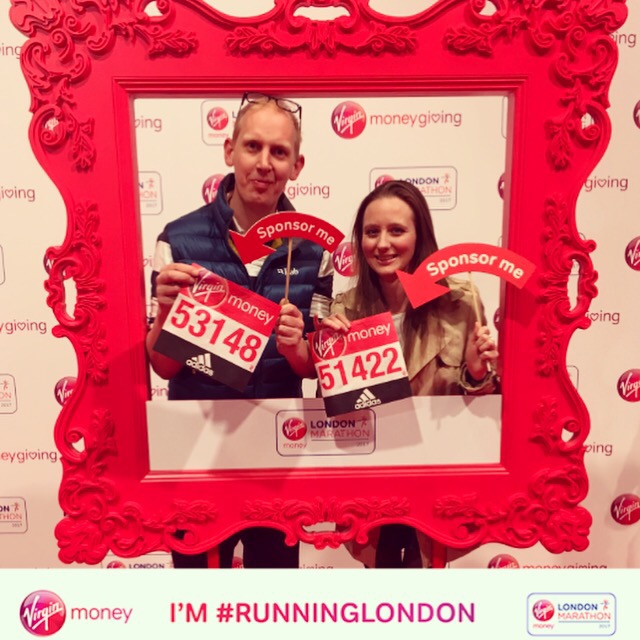 I set out very slowly, but to my horror, even on those first few paces I was very much aware of the pain in my leg. The first 2/3 miles were pretty awful mentally. All I could think about was what a long, long distance we had to travel, and how this was surely the best I would feel all day. I was worried that if I was so conscious of my leg even now, I may not be able to finish the race.

Gradually, however, as I started to warm up properly, the pain subsided. Well, either that or the rest of my limbs started to ache so much that I was no longer able to focus on just one area!

Starting in pen 9 proved rather frustrating, and I must have been incredibly under-ambitious when predicting our finish time. This meant I was initially running alongside people who were aiming to finish in 6+ hours which resulted in me becoming very frustrated early on, and using up a lot of energy trying to skirt around people and overtake. I was only too aware however, that I seriously needed to preserve my energy for the latter miles, and so at around mile 4, I decided to just give up and just got with the flow. As I’ve said before, it was my first marathon, so always destined to be a PB! I was surprised however, at certain points, both how thin the roads were and how congested things got.

My main learning for when/if I ever have the privilege of doing this again, is to ensure my predicted time puts me in an earlier start pen, so I can cover ground at a more decent pace whilst still feeling fresh. On the upside, one advantage was that I kept my pace surprisingly, and, for me, impressively, consistent throughout the race at between 10.10 and 10.50 minute miles all the way through.

As I relaxed, the miles started to race by! (Pun intended.) I was no longer in pain, I was having fun with the crowds, and soaking up the atmosphere, with “Wow! I’m here! I’m actually doing this!! I’m running the London Marathon!!!” circulating on loop in my head.

The crowd were truly fantastic and lined the course from start to finish. I had my earphones in my ears but didn’t end up listening to music at all (a first for me) as I didn’t want to miss out on the atmosphere for even a second.

Before I knew it, I was at mile 7 where I inhaled my first energy gel and managed to spot my first supporter, one of my best friends, Jenny, in the crowd. From Jenny at mile 7, to Taz at mile 25, seeing the smiling face of someone I know clapping and cheering my name was such an incredible boost – I managed to call out everyone I spotted and jump and wave in their face right until the end. The fact that I still had the energy to do so to Taz at mile 25, does somewhat make me questions whether I should have pushed myself hard?!

Around mile 9, I managed to pick out a guy, Tommy,  who I had met once at a Run Rogue (running club) event. He is such a positive, encouraging, and energetic person, that running the next 3 or so miles with him and his friend, also Tom, meant they whizzed by.

Around half way, mile 13, I caught up with my boyfriend, Rob, and we ended up running the next few miles together. This was probably better for me than it was for him because I was (as ever!) slightly whiney. I reached half way around 2.13, but things had started to ache epically, and doubts had begun to sneak in. For the first time, I seriously questioned whether I was going to be able to complete such an incredible distance.

At mile 14 however, came the massive high of the first Bloodwise cheer point, and the first sighting on  parents and family on the course. It worked out pretty well that Rob and I were running together at this point, as Rob’s Dad managed to take some great photos of us. 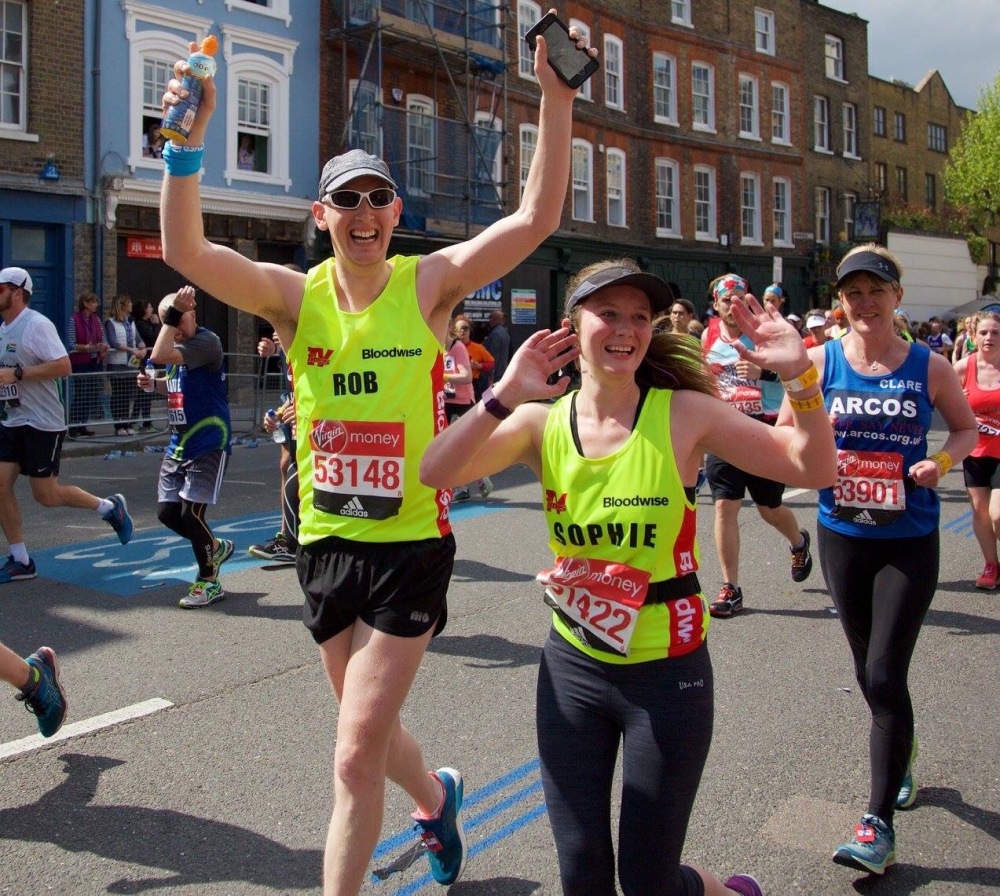 Mile 15 – 19 are sort of a blur of misery. I’ve heard a number of other people say that mile 20 onwards is where they struggled, but for me, it was this part that was the toughest. Around Canary Wharf crowds were thinner and views less appealing. Here, during these miles, I took my first short walks. One thing I am proud of, however, is that from not having actually completed a half marathon without taking at least one small cheeky walk break, I ran the vast, vast majority of the London marathon, and didn’t take my first short breather until mile 15.

The sight of mile 20 was a huge psychological boost for me! Only 6 miles left to go, just over an hour of running. I’d also worked out, reassuringly, that I could afford to walk a significant proportion of the final 10k, if needs be, and still finish in under 5 hours. Also, we were heading back in to town, things were getting more familiar and I knew I had a number of friends and family to look out for on the last few miles of the course.

I caught sight of my family again at just before mile 23 and pulled over to give my Mum a massive hug. It was at this point I started to feel a little emotional, in recognition of how close I was to the finish, and how incredibly far I had come. With my Mum’s words: “You’re doing soooo well!!!” ringing in my ears, I stumbled off and in to mile 23. 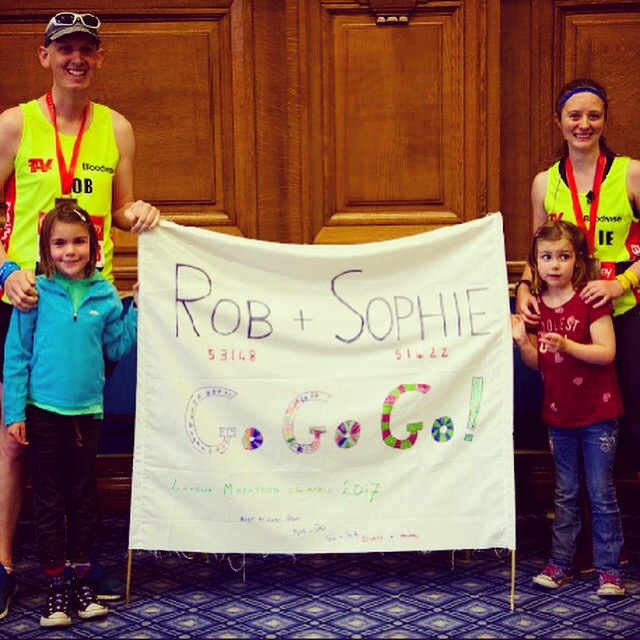 By now the temptation to walk felt almost overwhelming, legs were heavy and everything hurt and had started to ache. For the next couple of miles I turned to mindfulness, focussing on the here and now, and each step, simply putting one foot in front of the other. From mile 24 onwards, I was so, so close that I became determined to keep going at a running pace.

Mile 25 was amazing . The crowd was getting louder and louder, I was getting closer and closer. Until finally, 04hrs, 34mins and 44seconds after I crossed the start-line, against the stunning backdrop of The Mall and Buckingham Palace… I crossed the finish line, happy, tired but mainly just in a state of disbelief! 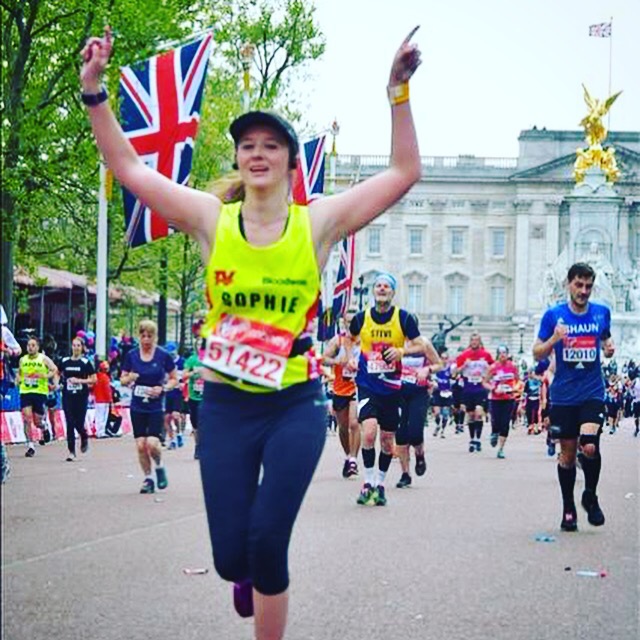 I managed to meet up with Rob easily, and we headed to the Bloodwise reception in Central Hall in Westminster for sandwiches, a drink and a much-needed massage. There we were greeted by a round of applause, photo requests ( first time in my life I’ve felt like a celebrity!) my parents, Rob’s parents, Rob’s sister, brother-in-law and nieces, who had made us an awesome banner and a selection of our friends, including my bff Nur who had brought me a beautiful bunch of flowers. 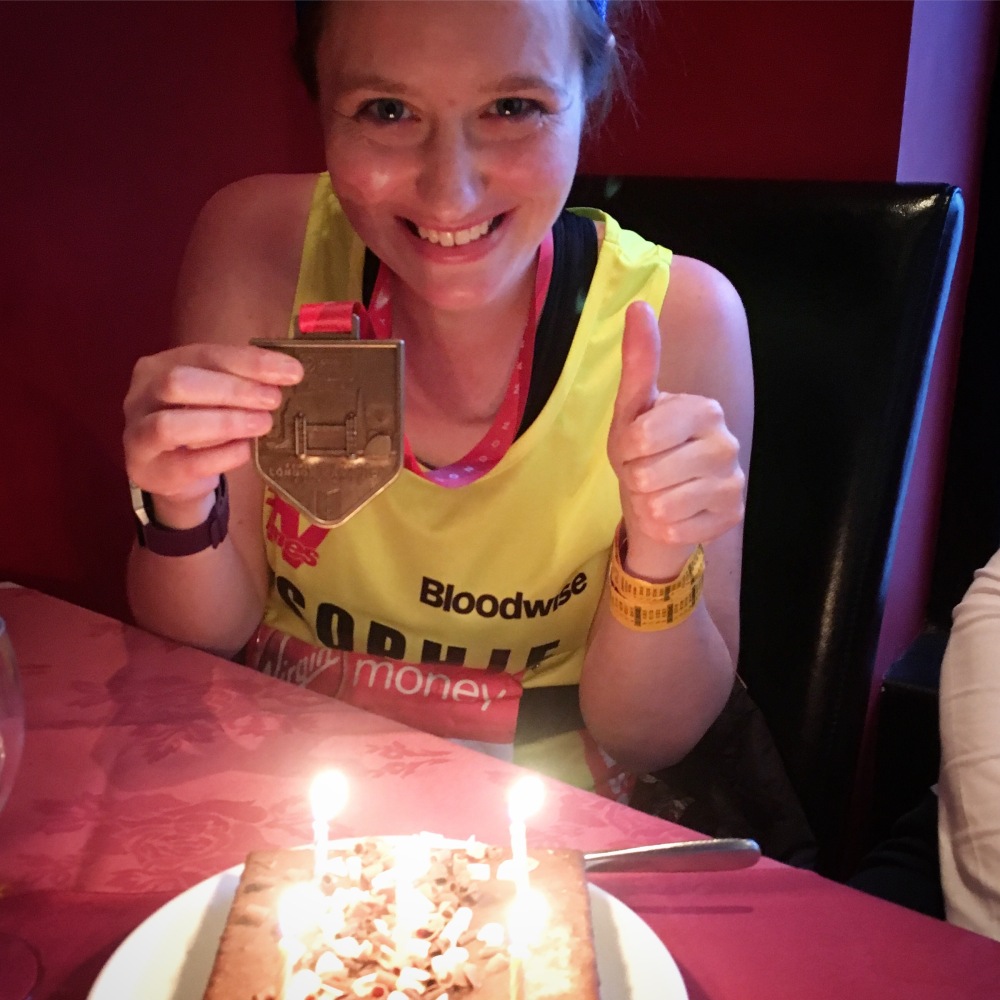 The rest of the afternoon and the next day, I felt achy, but within a couple of days was back to working out. Honestly, I’m not sure that our achievement has fully sunken in yet! But did I love (almost) every second of it, and would I do it again? Definitely! In fact, I maaaay already have taken the liberty of signing up for Brighton 2018.

Finally, I wanted to mention, that we have so far raised a phenomenal £10,489 to be split equally between Bloodwise and UNICEF. Thank you all so, so, much for your incredible generosity.